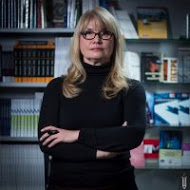 Vice Dean of the School of Architecture and Design

Viktorija Eremeeva Naumoska has been the Dean of the School of Architecture and Design at University American College Skopje since it was established in 2006 till 2016. With 27 years of experience as a researcher, urban and spatial planner, Ms. Eremeeva has carried out a wide range of spatial, urban and environmental projects while working with Institute for Physical and Urban planning-Skopje, Urban Planning Institute-Skopje, INPUMA-Skopje and Public Enterprise for Urban and Physical Plans. Also as a partner at design studio “Takting” with 20 years of experience as an architecture designer and as a consultant, she has carried out a wide range of urban, architectural and interior projects. With 10 years of experience up to today, she is teaching architectural design at bachelor studies and interior design at master studies. Furthermore Ms. Eremeeva is a licensed urban planner; architectural designer (A & B cat.), supervisor (A & B cat.) and auditor (A & B cat.) Ms. Eremeeva Naumoska got the prestigious award “November 13” by the city of Skopje for special contribution in the development of the architectural education in the Republic of Macedonia.