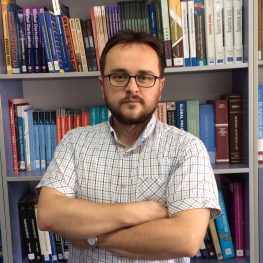 Dean of the UACS School of Political Science

Prof. Ivan Dodovski, PhD became the Dean of the UACS School of Political Science in 2011. Previously, he served as Dean of the UACS School of Foreign Languages. Currently he teaches courses in Critical Theory and Literature, Shakespeare, Modern Europe, Multiculturalism, Academic Writing, and Research Methodology. His research interests include identity politics, narratology and contemporary drama. For more than a decade Prof. Dodovski served as chairperson of the Programme Committee and the Editorial Board of the International conference on European integration, organised by UACS on an annual basis. He is Chair of the COST Action CA18114 ENTAN – The European Non-Territorial Autonomy Network (www.entan.org). He is also a poet and fiction writer whose works have been translated into several languages.