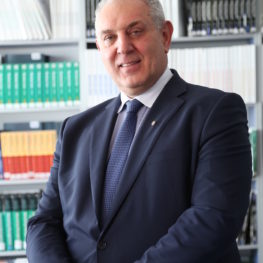 Prof. Marjan I. Bojadjiev, PhD is a Rector at University American Collage Skopje. Previously, he has worked as CEO of the Macedonian Savings House from 1996 to 1999 and as CEO of the third largest bank in Macedonia from 1999 to 2004.

Prof. Bojadjiev has served as manager of several companies in Macedonia, as a board member in professional organizations and as a moderator in conferences on national Macedonian energy and investment policies.

He has completed his doctoral studies at the Ss. Cyril and Methodius University – Skopje. He earned his Specialization degree in International Business Management at the University of Trieste. He has a Master of Science degree in Banking Marketing. Prof. Bojadjiev has completed executive education courses at Harvard Business School in 2008 and 2009.