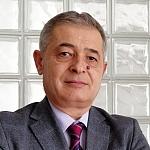 Dr Vladimir Radevski received his PhD degree in Computer Sciences from the University of Paris-13, France in 2000. His thesis addresses Pattern Recognition and Decision Fusion in Connectionist Recognition Systems. He holds a BSc degree in Mathematics and Informatics from University Ss Cyril and Methodious in Skopje, Republic of N. Macedonia and a MSc degree in applied mathematics from the University of Belgrade, Serbia. After working as a research and teaching assistant at the University of Ss Cyril and Methodious and associate for research and teaching at the University of Paris 13 he started his lecturing as Associate Professor at Franco-Turkish University Galatasaray, Turkiye in 2000. In 2003 he joined South-East European University – Faculty of Contemporary Sciences and Technologies, Tetovo, Republic of North Macedonia both teaching and holding various academic administration positions and serving as principal consultant for Indiana University USAID founded program of founding the University. He served on various positions in the university governance from Dean of Faculty, Director for research, Director of Campus and Vice rector for academic issues and digitalization. He was elected in the title of Full Professor in Computer Sciences from the same university in 2015. From September 2022 he joined University American College in Skopje and holds the position of Vice Dean for Education at the Faculty of Computer Science and Information Technology. He taught variety of courses in computer sciences on undergraduate, graduate and PhD level. He was also Program manager for the Staffordshire University franchised programs at University New York Skopje from 2007 to 2010 and taught courses on undergraduate and MBA programs in Skopje and Athens. His research interests address problems in the domain of Decision Support Systems, Machine Learning and lately in Semantic Web and its applications in information retrieval and fusion. He maintains active research collaboration with research groups in the 9-September University, Izmir, Turkiye, ZBW, Kiel Germany and the University Paris 13, France. He is an active expert of EU Eurydice Network and participated in several EU founded projects as Tempus, Erasmus and Horizon2020. He is member of National UNESCO committee and sits in various expert bodies and participates in the work of professional associations and commissions. He speaks several European and Balkan languages and participates in the International Association of Polyglots.