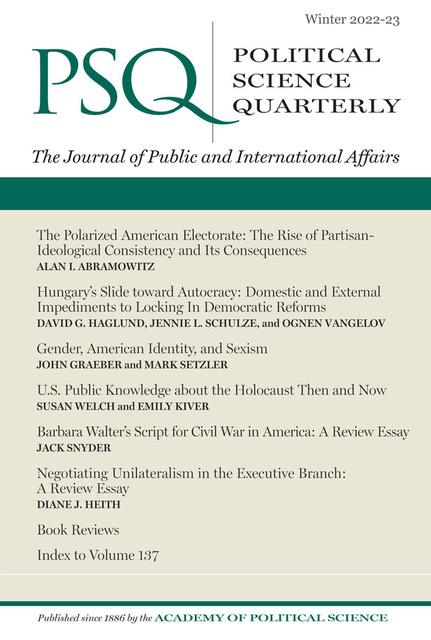 UACS assistant professor Ognen Vangelov co-authored the article ‘Hungary’s Slide toward Autocracy: Domestic and External Impediments to Locking In Democratic Reforms’, which came out in Political Science Quarterly, the oldest and most widely read political science journal in the United States.
DAVID G. HAGLUND is a professor of political studies at Queen’s University in Canada, where he specializes in American foreign policy and transatlantic security. His latest book is Sister Republics: Security Relations Between America and France (Louisiana State University Press, 2023). JENNIE L. SCHULZE is an associate professor of political science at Duquesne University in Pittsburgh, whose research focuses on the influence of European institutions and kin‐states on minority policies and minority integration in Central and Eastern Europe. She is the author of Strategic Frames: Europe, Russia and Minority Inclusion in Estonia and Latvia (University of Pittsburgh Press, 2018). OGNEN VANGELOV is an assistant professor of political science at University American College Skopje. He specializes in issues of democratization and politics of nationalism, and has written “The Primordialisation of Ethnic Nationalism in Macedonia” published in Europe‐Asia Studies.
December 22, 2022 | News |
Previous